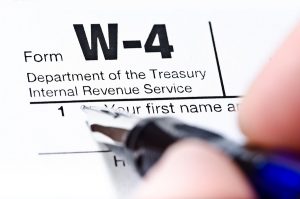 When will the new Form W-4 be released? In 2020, according to a press release published by the Treasury Department on September 20, 2018. The department announced that the IRS will implement a redesigned W-4 form for tax year 2020, a timeline that will allow for continued work to refine the new approach for the form.

As a result of the enactment of the 2017 Tax Cuts and Jobs Act, the Treasury Department and the IRS are revising the wage withholding system and Form W-4, Employee’s Withholding Allowance Certificate. In June 2018, the IRS released a draft redesigned form for public comment and received many suggestions for improvements, which they are working to integrate.

For tax year 2019, the IRS will release an update to the Form W-4 that is similar to the 2018 version currently in use. The 2019 form will be released in the coming weeks according to the usual practice for annual updates.

The Treasury Department and IRS will continue working closely with the payroll and the tax community as additional changes are made to the Form W-4 for use in 2020. The intent of these additional changes is to make the withholding system more accurate and more transparent to employees. The IRS will release the 2020 form and related guidance and information early enough in 2019 to allow employers and payroll processors ample time to update their systems.