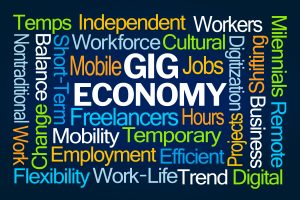 By now you’ve heard of the term “gig economy” but you may not know what it means. Is it describing the economy of musicians as they work gigs? Does it mean something about computers and the measurement of space allotted for their programs? Does it have something to do with fishing? Well, not exactly. But, have no fear! We will break this term down into easy bites and you’ll be an expert on the gig economy in no time.

What IS the Gig Economy?

The term “gig economy” refers to the new landscape of employment in the world where workers are hired for temporary, flexible jobs instead of full-time permanent positions. Think of it this way: workers in a gig economy are paid for completing a job in a predetermined timeframe—like musicians are paid for a night of music (a gig) at a venue. In a gig economy, you see that independent contractors and freelancers tend to be hired over the more traditional, full-time job seekers. Examples of jobs that thrive in this economy are technology-based positions, creative jobs, and the new tide of service-based positions in companies like Uber, Airbnb, and Instacart.

Forbes magazine reports that according to the 2018 numbers from the Bureau of Labor Statistics, there are 55 million people in the US classified as gig workers. This is a huge number! In fact, that translates to more than 35% of the current US workforce. Projected to rise to 42% in 2020, over 40% of these workers are estimated to be millennials.  As those numbers increase, the proportion of male to female workers shifts. Once right at 50/50, the new ratio is 60/40. This is attributed to larger numbers of women returning to school for postsecondary education. In fact, many leave the workforce completely to return to school versus taking courses and working at the same time.

There are many pros to a job in this category. Job seekers who are looking for gig economy positions name flexible workplaces and flexible hours as their top priorities. The shift to remote offices as well as the freedom to work at whatever hours are most convenient definitely supports this new economy. Employees who have the discipline to manage their workflow and complete tasks on time are ones that will thrive in a gig job. The positives are not limited to just the employees, though. Employers like being able to choose new hires from a much larger pool of candidates because they are not tied down to job seekers in their immediate vicinity. Employers are also able to save money as they do not have to invest in work equipment, health benefits, or on-going training for these independent workers.

The cons of gig work are some of the flip sides to the pros of gig work. These drawbacks include the absence of health benefits and 401k benefits. Freelancers have to buy their own healthcare and figure out their own savings schedule for retirement—both of which aren’t impossible, but they do take up time and tend to be at a greater expense than the benefits offered in a traditional work environment. Gig workers also face the reality of no paid sick days or vacation days. If a freelancer has the flu, he isn’t paid for the time he misses from work and his deadline isn’t adjusted in this task-based economy. On the employer side of the equation, companies report that the pool of qualified candidates for higher level management positions continues to get smaller as the trend for gig workers who freelance from job-to-job increases.

The workplace continues to evolve from a traditional 9-5 workday in a traditional office environment to one that is a flexible work cycle in an ever-changing location. Employees place high priority on setting their own rhythm for work flow and prize independence. Employers are encouraged to stay in-tune with the gig economy and to seek ways to marry their company’s needs with the needs of this new workforce population. Both employer and employee can benefit from this new work landscape.